This duo came along to one of our SSLaP nights and proved such a hit, we had to have them for a full night.

After selling their home to hit the road, the acoustic duo spend large parts of the year touring. Their stories and adventures are deeply rooted in their music and their songs speak of amazing journeys both real and imagined.
Brought together by a love of music when they first met in 1991, at Hull University, they’ve been travelling on musical journeys ever since. Settling in Hastings in East Sussex in 2002 they played in various musical projects from samba bands, ukulele sextets and a cabaret trio all the while gathering and writing songs with music taking them further and further afield. From these travels and adventures they longed to hit the road full time and in June 2013 they sold up and began an inspirational journey that’s taken them all over the UK, Europe and New Zealand. Playing at acoustic clubs, folk clubs, festivals, house concerts and even busking, brings new people to their music. 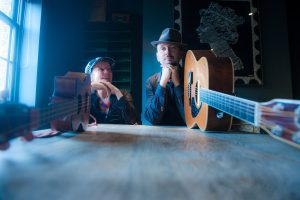 Support is from Local duo Windsong Revisited, which is Beverley Gray with Angela Mayorga playing folk/contemporary songs with harmonies. Bev has played at the club many times before but, this is a debut for the duo. 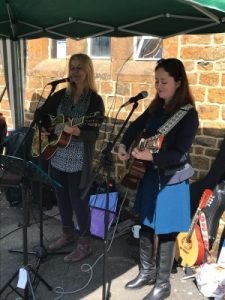