Navaro are a UK-based trio of singer-songwriters who found they shared an instant chemistry upon meeting. In 2008 they released their debut album, Under Diamond Skies to an enthusiastic reception from the country roots press. The follow-up album, (Home Is Where Your) Heartlands was similarly well received. Numerous live outings have seen the band opening for Fairport Convention and Colin Blunstone as well as making festival appearances and enjoying Arts Centre headline spots.

‘So Long Wichita’ is their new album for 2019.
“It finds us back on the Grand Union Canal testing out our new song ideas on each other and experimenting with arrangements. Recording on the water either by candlelight or whilst looking at the ever-changing woods just outside suits us well.
We hope that for the most part the serenity of our setting found its way into the recordings, though the occasional goose-honk may break the spell somewhat!”
Support is from Local band, 25 Years Late. 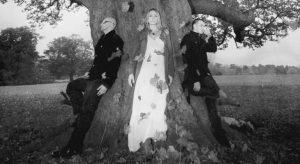