Genius Concertina player, who has received a rave review in fRoots magazine.

Steve Turner is one of those artists who have been the backbone of the British folk scene but has been out of circulation as a professional musician for around eleven years. He was tempted back recently, in part by Mick Peat but, as he said in a recent article – “folk music seems to get into your blood!” – and four or five years ago he started doing a few gigs again and came gradually back on to the folk scene. 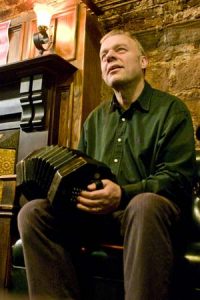