We are very happy that the Sensational Irish duo, Duff Paddy, are here to help us celebrate St Patrick’s Day.

Duff Paddy are an acoustic duo consisting of Paul Tuthill on accordion, bodhrán (traditional Irish hand drum) and vocals, and Paul Mitchell on guitar and vocals. They play a blend of modern and traditional acoustic music combining instrumentals with ballads, both covers and original material covering Cetltic (Irish Folk, Scottish Folk, English Folk) and Alt.Country/Americana styles. Both Paul’s sing well and impress as a harmonic duo.
Both have played professionally for many years, both starting in their teens, and have performed live across Europe, the UK and the USA.
Paul Tuthill was all Ireland bodhrán champion in his teens and his virtuosity on the instrument is always a popular feature of any Duff Paddy live performance.
Both have performed with many luminaries in the traditional music world including Ronnie Drew (The Dubliners), Danny Thompson (Pentangle, John Martin), Dave Pegg (Fairport Convention, Jethro Tull) and a string of others. 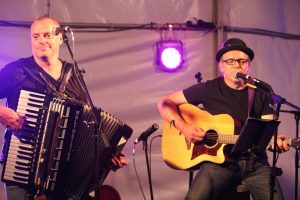