PLEASE NOTE: THIS EVENT IS IN ‘THE LONG ROOM’ AT THE MILL ARTS CENTRE, SPICEBALL PARK RD, BANBURY. OX16 5QE.

Richard Digance really needs little introduction to anyone, either in the Folk world or further afield. He has been number one on the Club’s ‘Hit List’, ever since the committee took over.

He is a BAFTA Nominated entertainer and a recipient of The Gold Award from The British Academy of Composers and Songwriters. He has also won a Sony Award and is one of only three British folk singers mentioned in The Virgin Anthology of Songwriters for his contribution to comedy songwriting.

He has released 31 albums, written 14 books and has nearly 5 million visits on YouTube. He also composed the songs and music for Bill Bryson’s best-selling Audio CD book ‘The Road To Little Dribbling.’ He has worked in America with movie star Steve Martin and recalls two of his greatest moments as playing The London Palladium with Robin Williams and a guitar duet on TV with Queen guitarist Brian May.

Off-stage he composes soundtracks and incidental music for TV and movies plus audio CD books.

Please book early for this event. We are requesting payment in advance, due to limited spaces available. 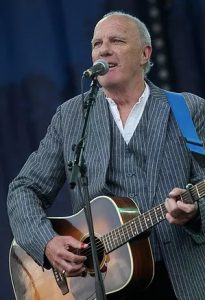