PLEASE NOTE A CHANGE OF LINE-UP. Michael has transport problems and cannot play this evening.

Instead we have local duo Roaming Spirits, fresh from performing at the Swarb Memorial event last weekend. 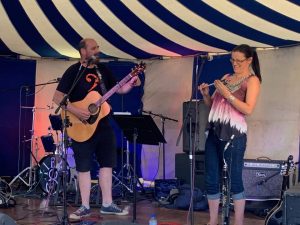 Michael McGovern is a 25 year old singer / songwriter from Glasgow, Scotland. From picking up the guitar as a child and writing songs from an early age, Michael has defined his folk sound in the thriving music scene in his hometown. His debut album, ‘Highfield Suite’, is a summation of his work since he began writing songs as a teenager. The music mirrors this period of life, focusing primarily on friendship, love, regret and reconciling with your mistakes.

In 2019 Michael released a live single “The Harbour”, with his folk duo Between Brothers. He went on to play four sold out shows in Glasgow, including at the prestigious Celtic Connections festival as a debutant, as well as a Sofar Sounds performance. Michael then went on to perform at Maui Waui Festival in Suffolk, and along with regular weekly performances is building up a loyal following.

Since the pandemic brought an end to live performance, Michael spent much of 2020 in isolation recording this album. The majority being recorded into a single microphone in a small wooden cabin in Ireland.

“a noteworthy debut…the sonic and performance levels are impeccable…Highfield Suite warns of a real talent arriving among us.” – Jackie Hayden, Hot Press Magazine As part of a double header, it’s great to have Drew Pountney back at the club, sharing the evening with Michael.