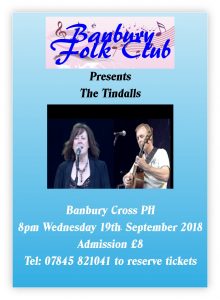 It’s always a pleasure to welcome Paula and Stuart – The Tindalls. Great performers and long-time supporters of the Club. Their intricate harmonies and fabulous songs, are guaranteed to please. They have performed all over the country, including at Fairport’s Cropredy Convention in 2010, with their daughters. Admission is £8. To reserve tickets, call the Box Office on 07845 821041 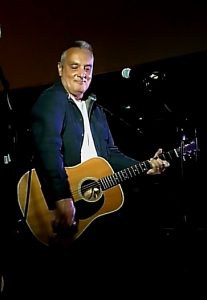 Supporting will be John Mosedale. A newcomer to the folk scene and, at 52, a fledgling solo performer and song writer. He spent half a lifetime working in other areas of the entertainment business until nearly ten years ago. Then a chance meeting last year with a folk legend and National Treasure led to him starting to write. In May he was joint winner of the Upton Folk Festival Acoustic Competition and has his own slot at the festival next year.
Banbury will be his longest ever set of all original material.

A couple of photos from the night, courtesy of Geoff Phipps and Ian Ralph Huckin. 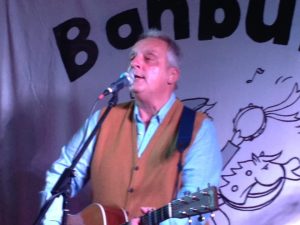 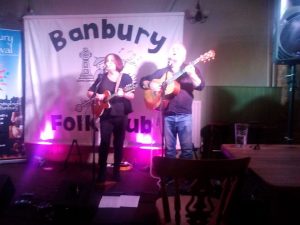