Andy Zukowski, Peter ‘Badger’ West and David Alleyn, collectively known as The SKEPTICS, are a North Oxfordshire based, male a-cappella trio who have become widely known for their stunning harmonies and distinctive style.

With their musical roots firmly planted in a variety of genres including folk, jazz and choral, they came together in 2009 via a shared desire to bring something different to the folk canon whilst honouring its traditions and heritage.

As regular performers at several regional festivals including Folk Weekend Oxford, BunkFest and Banbury Folk Festival, they delight audiences of all ages and have steadily built up a reputation as the perfect act for any occasion with their quirky entertaining performances.

With 3 albums already released, and another in the pipeline, The SKEPTICS audio recordings span an eclectic mix of songs and styles, including everything from Blur to Bagpuss and Bluegrass to The Bahamas … all of which perfectly encapsulates their passion for mixing the traditional with the unexpected.

So, whether you catch The SKEPTICS at a live gig, listen to their audio recordings on SoundCloud, or watch their curated selection of videos on YouTube, you’ll be amazed at the wide range of genres they can “Skepticise” into folk/fusion! 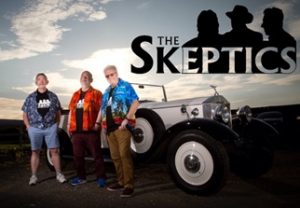 Support is from The Meloncholy Boys.