Really happy to have Sunjay back at the club, following two sessions last year and a festival appearance. He was due to play in November but, was struck down with a nasty dose of the flu. Do not miss this one! To book tickets, please call the box office on 07845 821041.

You could be forgiven for thinking at first listen; singer/guitarist Sunjay is older than his 21 years. With a relaxed and confident manner, vocal style and mastery of his instrument he walks onto a stage and addresses the audience as though he is sitting down to play music with a group of close friends; a completely natural approach for a young man who picked up the guitar when he was just 4 years old and hasn’t put it down since.

Sunjay’s style has that natural drift between folk and blues and both camps have recognised his
obvious flair. There have been a clutch of award nominations, including winning the Wath Festival Young Performers Award. He also made the final selection for the BBC’s Young Folk Award in 2012, had three nominations at the Exposure Music Awards 2014 and was also recognised by the 2014 British Blues Awards.

Drawing from a rich, musical and cultural background it is hardly surprising that Sunjay has quickly become recognised as one of the UK’s rising stars. His performances have been described as “mature & confident”, while his guitar playing has been hailed as “superb, brilliant, experienced, intricate & faultless”.

Sunjay clocked over a hundred tour dates in 2013 supporting the likes of Steeleye Span, Martin Simpson, Passenger, and Terry Reid. With two albums already to his name, (‘Seems So Real’ 2011 and ‘One Night Only’ 2013) Sunjay has just recorded his third release (“Sunjay” released 29th September 2014).

The self-titled new album features Sunjay at his finest, collaborating with musicians including producer Eddy Morton (The Bushbury Mountain Daredevils), Liam Genockey (Steeleye Span), Katriona Gilmore (Gilmore & Roberts), Dan Walsh (Walsh & Pound), Sarah Smout (The Gren Bartley Band), and Charlie Barker.
“Already creating a stir with talents way beyond his years. A really soothing, natural sound and most definitely destined for bigger things.” – Maverick Magazine
“For such a young performer, Sunjay shows real confidence, maturity and ease on stage that it seems like he has been doing nothing else all of his life.” – Folk All Magazine
“A great voice.”- Blues Matters Magazine
“He’s a wizard on the guitar; I think I’d call it jazz-folk!” – Vin Garbutt
“An amazing picker, a must see.” – Terry Reid
“Listen, watch and take note.” – FATEA Magazine 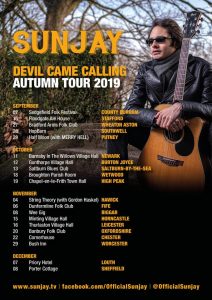