Following the success of his critically acclaimed 2018 solo album, True North, Phillip Henry returns to the road in February 2020. His new show, Solo, continues to explore the virtuosic limits of his many instruments, from the 22-string Indian chatturangui, to the Dobro and National guitars that made his name. He will also bring his showstopping skill on the  harmonica, with train impressions, boogie blues, and his trademark beatbox harmonica that never fails to get the party started. Having toured across five continents, from Japan to South Africa, Canada to Australia, his repertoire gathers songs of the road, tunes learnt around the festival campfire, and music from thousand-mile-distant friends. A BBC Folk Award winner, Henry has played with many roots music legends, from Seth Lakeman and Show of Hands, to his role in Peter Knight (ex-Steeleye Span)’s Gigspanner Big Band and his work with the duo Edgelarks. Solo returns the focus to his extraordinary instrumental skills. He is no stranger to holding the stage alone, having opened for Kylie Mynogue at Hyde Park to 50,000 people as part of BBC Radio 2’s Festival in a Day, where his legendary beatbox harmonica well and truly got the party started. “Remarkable…the sound of a virtuoso and a master of his instrument. “An absolutely splendid recording of uncommonly deep and textured music that feels utterly spellbinding throughout”-Folk Radio UK “Dazzling wizardry-a spellbinding, singularly talented virtuoso musician”-FATEA*****. 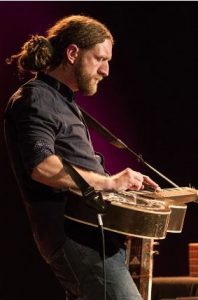