PLEASE NOTE. THIS EVENT WILL BE AT ‘THE COACH AND HORSES’, BUTCHERS ROW, BANBURY. OX16 5JH.

Wonderful to have these two back at the club. They will be performing their own sets and joining together as a duo.

Odette Michell is an award-winning British folk singer-songwriter, guitarist and bouzouki player with a stunning new take on the acoustic tradition and a voice capable of demonstrating the finer points of both folk and traditional song with genuine craftsmanship. Things have been moving at something of a pace for Odette ever since she released her debut EP ‘By Way of Night’ in 2018. The EP showcased a bold and emerging talent within the British folk and acoustic music scene and garnered high praise, earning Odette her first national and international radio plays on both BBC and Folk Radio stations. In April 2019, Odette released her debut album ‘The Wildest Rose’. The album gained widespread positive acclaim followed by a string of live interviews, and featured notable musical contributions from Phil Beer (one-half of multi-award-winning acoustic folk band Show of Hands), and Toby Shaer (Cara Dillon, Sam Kelly & The Lost Boys).

Katie Grace Harris is a gifted multi-instrumentalist, singer/songwriter and storyteller with a fast-growing reputation in the UK Folk world. Her sound can best be described as earthy, Piano and Accordion accompanied English Folk. Musicianship at its finest! … Bringing traditional folk styles into contemporary settings and giving them new life…well worth going and checking out. 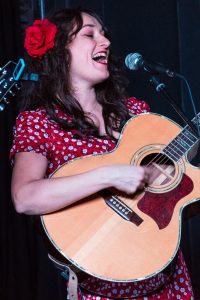 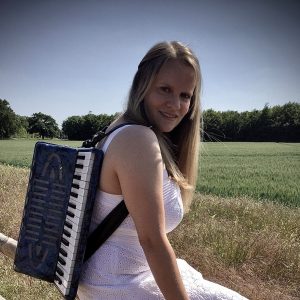