It’s been almost 10 years since Nick came to the club and a reappearance is overdue. Nick Dow has been singing and collecting Traditional Folk Songs for over forty years. His guitar playing is sensitive and well thought out and his repertoire contains many songs you will hear nowhere else. Nick has gleaned songs from the West Country, and been given songs by the Travelling people with whom he has lived and worked.

Nick is trained in the dying art of Gypsy wagon painting; he’s worked as a painter for a long list of celebrities including Ronnie Wood of the Rolling Stones.

His gigs are informative and entertaining. He has a great sense of humour, and nobody goes home disappointed.

The adjective “sturdy” is the overriding impression that first acquaintance with Nick’s singing affords: his is a well-rounded and full-toned baritone with a warm, supremely even-toned range and a grand confidence in the direct, unfussy delivery –David Kidman

Nick is a fine guitarist and his backings are carefully worked out and always appropriate, but to hear the full majesty and impact of this magnificent voice at its finest, then it is those where that voice is heard on its own that these ears are attracted to. Vic Smith

He’s really a rather good and interesting singer Rod Stradling

The quality of his singing left me reeling He has a warm, mellow, lived-in voice that invites comparison with Cyril Tawney and Dave Burland. Tony Hendry 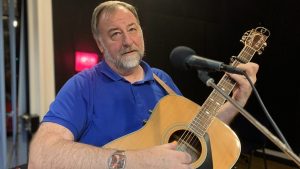