Les’ books contain a mixture of monologues and comic songs with serious songs. The monologues tip the hat to Marriott Edgar. Like Edgar, Barker has created several recurring characters and themes such as ‘Jason and the Arguments’, ‘Cosmo the Fairly Accurate Knife Thrower’, ‘Captain Indecisive’, ‘The Far off Land of Dyslexia’ and Spot of the Antarctic, which have become trademarks of Barker’s work. Both his funny and more serious songs have become standards for other singers such as Waterson-Carthy and June Tabor.

He is also one of the few writers (alongside Stephen Sondheim, with his parody The Boy From) to get the Welsh place named lanfairpwllgwyngyllgogerychwyrndrobwllllantysiliogogogoch into a song successfully (it forms the main chorus of a song of the same name, and is sung four times). In the mid 2000 Barker moved to Wrexham, Wales and has learnt Welsh, producing two books of poetry written in the Welsh tongue.

In 2008 he got an award of the NIACE Inspire Award as Welsh Learner of the Year, and recited his poem “Have you Got Any News of the Iceberg?” in Welsh at the presentation in Swansea.

In 2009, a campaign by his folk fanbase sought to have him chosen as the British Poet Laureate.

After a Heart Attack in January 2008, Barker began solo gigging again. Barker has remained firmly rooted in the circuit of folk clubs and festivals. He has also performed as part of a double act with Keith Donnelly under the name “Idiot and Friend”. 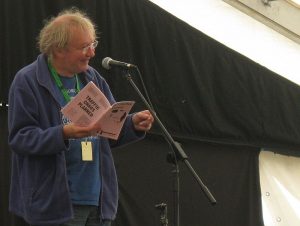