Legends in the folk music world, are few and far between. It’s certainly an accurate epithet to describe Julie Felix and it’s the club’s pleasure to bring her to Banbury.

Julie left her native California in 1964, and after hitching through Europe with a duffle bag and guitar arrived in England, and soon became one of the all-time greats of the ‘60s folk music boom. A few months after her arrival she became the first solo folk artist to be signed to a major British record company when Decca released her first album, ‘Julie Felix’, and a single, ‘Someday Soon’. That same year Julie appeared on The Eammon Andrews TV show, and was asked back the following week by popular demand.

In 1967, Beatles manager Brian Epstein booked Julie to top the bill with Georgie Fame for a two-week engagement at London’s Saville Theatre, supported by a newcomer named Cat Stevens. In 1968 the BBC gave Julie her own TV series – the BBC’s first colour series.  Her guests on the 17 shows included Jimmy Page of Led Zeppelin, Leonard Cohen, Donovan, Dusty Springfield, Spike Milligan, Fleetwood Mac and Richard Harris. In 1970 the T.V. series was moved from BBC2 to BBC1.

The following year Julie appeared at the Isle of Wight Festival with Bob Dylan, and she was then signed by hit-maker Mickie Most, becoming the first artist to have a hit on the RAK label with her version of Paul Simon’s ‘If I Could ‘(El Condor Pasa’). Her first LP on RAK, “Clotho’s Web”, included contributions from John Paul Jones (Led Zeppelin), Danny Thompson (Pentangle) and the late Cozy Powell (Jeff Beck Group). This album became a collector’s item, and thankfully it’s now been re-released.

In 1974 Julie signed to EMI and recorded the album “Lightning”. She toured Japan, Australia and New Zealand to promote it, and in the late 70’s she moved to Norway where the title track of her 1976 album ‘Hot Chocolate’ went to number 1 in the singles chart.

In April 2008 Julie again joined forces with P.J Wright, and with the multi-instrumentalist Anna Ryder formed The Julie Felix Trio, who headlined a tribute to Bob Dylan at Hammersmith Cultural Centre, London to great acclaim. That same year her fine album “Highway of Diamonds” was released, and also a double CD released repackaging her first three albums for Decca.

The album “La Que Sabe” was released in 2009, and her first live album for some years, “In The Spotlight”, released in 2013, documented a performance at the prestigious Leicester Square Theatre to celebrate her 75th birthday.

On June 14th 2018 Julie celebrated her 80th birthday playing a sold out gig at Charing Cross Theatre in London. She was joined on stage by guests that included Led Zeppelin’s John Paul Jones and also Blue Mink’s Madeline Bell.

In 2019 – at 81 years of age – Julie played many prestigious gigs and Festivals, including Glastonbury Festival and the festival celebrating the anniversary of Bob Dylan’s legendary appearance at the 1969 Isle Of Wight Festival – the 50th anniversary of her appearance there too!

During her long career Julie Felix has sung out for many causes. She has visited the Middle East as a humanitarian ambassador for Christian Aid; urged New Zealanders not to engage in conscription at a concert during the Vietnam War; campaigned for Latin American refugees; founded ‘Guitars Against Landmines’, marched against the Iraq War in London, and joined Brian Eno in a London concert for “Stop The War – Don’t Attack Iran”.

When Julie comes on stage you’ll see nothing’s changed – despite being in her 82nd year she’s still brimming with energy on and off stage, performances exuding pure joy for music and the world around us. There are those who just have to play and sing; there can be no question of quitting; her work is not a job, but a calling.  Julie Felix is one such musician.

She had two UK Singles Chart Hits in 1970, the first of several on the RAK label, produced by Legendary Producer, Mickie Most. The first was with the Song entitled “If I Could (El Condor Pasa)”, while the second “Heaven is Here”, was written by Errol Brown and Tony Wilson of Hot Chocolate. 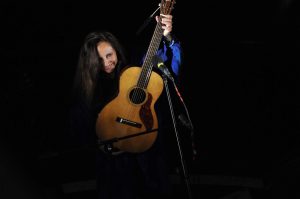