“We think our repertoire is pretty much non-specific, and is bounded only by the songs we find and fall in love with – from England, Scotland, Wales and Ireland, from America and Australia etc. – except in as much as our material is almost entirely accompanied songs, with a smattering of acapella, and very occasionally a tune!.
About half our material is traditional songs, both from the mists of time, such as “The Broomfield Hill” and “Annan Water”, and those that can be dated in history (sometimes with known authors!) e.g “The Newry Highwayman”. But we’ve also adopted contemporary folk classics like Dougie MacLain’s “Caledonia”, and John Warner’s “Anderson’s Coast”, through to “folkiefied” pop ballads such as Suzanne Vega’s “Queen and the Soldier” and Del Amitri’s “Nothing Ever Happens”. We’d like to think that Eclectic Folk sums it up!”

We really started in 2008, previously performing as P.S. – reflecting our names, and cryptically as “poste-script”, because playing together as a duo was a bit of an afterthought… we had been together, for 5 years (and married 3), before we thought to combine our musical “talents” as a duo!!! Too cryptic by far and it didn’t catch on! The new name seems much more popular!

Phil Thurman : Vocals, Guitars, Bouzouki
I was running the Fir Tree Tavern on Iffley Road, Oxford, when in 1994 a bunch (if that is the correct collective noun) of Oxford folkies including a certain Mr Ian Giles came looking for a session venue – I suggested our usually quiet Tuesday night – and the rest (as they say) is history….. the session became very highly regarded, and I got hooked on Folk music.

Sophie Thurman : Vocals, Cello, Whistles
As a classically trained soprano, and a lover of jazz classics, I first became involved in folk music in 1999 when the very same “certain Mr Ian Giles” invited me to audition as cellist/singer for Magpie Lane (as their then cellist was leaving the band). A wonderful introduction, and I’ve loved being a member of Magpie Lane for 13 years now, and counting! 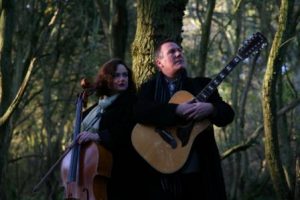