Over the years, we have had many talented singer/songwriters at the club. However, as far as anyone can remember, never have we had someone who has written a worldwide number 1 song (7 countries including UK and Australia. That’s exactly who we have in Ian W Brown. If you want to know what song that was, come along, as it will be in his set. You will know it! This is a fundraiser for the festival in October, where Ian will also be performing.

Daniel Mays plays a better-looking version of him in the Fisherman’s Friends film and Gregor Fisher’s downtrodden manager character in 2003’s Love Actually may have been based on how he transported an ex-prog rocker to the top of the Christmas charts in real life in 2001, but now folk’s favourite former farmer and secret hit maker Ian W Brown is announcing new gigs in his own right.

It’s 20 years since Ian gave up the muddy life of a farmer having decided he stood a better chance of being happy and making a living by swimming against the tide in the shark-infested waters of the music business while trying to save the world with a song.

In those two decades he has managed artists, co-produced films, released records, co-written a number one single and the lead song in a West End hit, toured the UK, played Glastonbury, won friends and influenced people… and now he’s writing a book!

This spring has seen the incredible true story of how he signed and managed the Fisherman’s Friends to a £1 million major label record deal and into the top ten album chart in 2010 turned into a heartwarming film that is already the feel good hit of the year. What’s more, he still manages and is very much friends with the fishermen.

Coming soon is Wild Rose, an acclaimed British musical drama starring Jessie Buckley and Julie Waters about a singer from Glasgow who dreams of country music stardom, for which Ian has co-written some of the music.

Now he’s returning to the stage to play some of his songs that have graced the charts and so many more that haven’t. His finely-honed everyman tales and self-deprecating musical outings are interspersed with tall tales from the music business, life, love and the universe, some of which will grace the pages of his eagerly awaited (by some) musical memoir/manual.

Let’s face it, there’s plenty of material to draw on. As well as writing the lead song in the long running West End musical ‘Dreamboats and Petticoats’, Ian has written songs for many other artists, from folk acts such as the Fisherman’s Friends and Show Of Hands, to pop stars like D-Side, Simon Webbe and Pixie Lott, he even had dance hits with Drumsound & Bassline Smith, Sandi Thom and Don Diablo.

In the last year Ian’s songs have played on BBC Radio 1, 2, 4 and 5. He is working on something for BBC Radio 3, once he has mastered the nose flute.

On stage Ian has supported 10cc, Steve Harley, Rita Coolidge, Julie Felix, Martin Simpson and Martin Carthy and has played many festivals including Glastonbury, Cornbury, Purbeck and Greenwich. His proudest moment, however, is performing ‘The Five Foot Two Inch Giant’, an anthem to his wife, on the Model Village Stage at Wimborne Minster Folk Festival… he could make this stuff up, but he doesn’t have to!

Ian W Brown is the only known pig farmer to be nominated for an Ivor Novello Award. 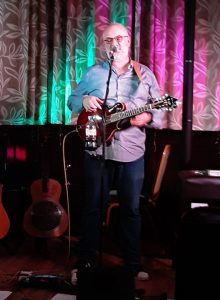