We saw Dom at Wychwood Folk Club, supporting IOTA, and we knew we had to have him play at our club. A mix of eclectic covers and excellent self-penned songs, we think this young man, is going a long way in the folk world.

Dom Prag is a young folk singer/songwriter from Southampton. He first gained recognition playing at open mic nights and pubs in Brighton in 2013-14. He quickly gained accolades for his distinctive style. His own songs combine folk, with blues and classical influences, into gripping musical narratives. He has an interest in traditional songs especially those about injustice and does some finely crafted covers of classics by the likes of Richard Thompson, Leonard Cohen and Christy Moore. His inimitable arrangements have won him many new fans on the folk circuit. He plays a nylon strung classical guitar, and the instrument sometimes takes quite a thrashing.

In 2015, while still in Brighton, he released an EP, Talitha And Other Songs which has since been played on local radio stations up and down the country. In 2016 he began playing on the folk club circuit and in 2017 he was part of the Arts Council funded Ferry Tales Project, with Bloodaxe poet, Robyn Bolam. He was the songwriter on the project and two of the songs he wrote for it are on his debut album, Young Man On A Ferry, released in December 2018. He is currently working on a new album, produced by Phil Beer.

In the past two years he has been in demand for folk festivals, playing at Wimborne, St Albans, Wessex, Purbeck Valley, Wickham and The South Downs folk festivals. In 2020 he will perform at Warwick, Great North and the New Forest folk festivals.

‘I recently saw Dom at Nettlebed Folk Club playing Richard Thompson’s ‘1952 Vincent Black Lightning’ (not on this album). Anyone taking on this classic song successfully needs to have great skill and precision on the guitar. Dom has both and certainly deserves your attention.’ Shire Folk

‘We were lucky enough to have Dom open up a show for Chris and me, and we were both really impressed with him. Great playing, singing and writing, and a lovely stage presence. Watch out for Dom, his star is definitely on the rise’
Julie Matthews (While and Matthews)

Support will be from the ever-popular local band, Scarecrow. Dave, Rey and Gordon are based locally. They have supported Banbury Folk Festival for many years. Their music is a splendid mix of beautiful tunes, traditional songs and up tempo ballads which will have you cheering for more and dancing in the aisles. The repertoire includes some Irish instrumental music, some distinctive songs and occasionally a twist of jazz or blues, all have been worked on to produce tight and unusual arrangements. The band generates an atmosphere of good humour, energy and fun. 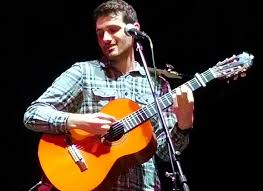 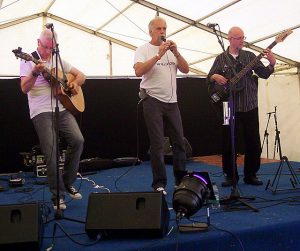